Andoni Luis Aduriz is considered as one of the most influential chefs of our time. .Throughout his career, he has prioritized both culinary evolution and an interdisciplinary approach. This has allowed him to cross the established borders, and become a rebel in the kitchen.

Aduriz' multidisciplnary approach embraces the innovation in the kitchen and the most diverse sectors. This is evident through his patronage of the Basque Culinary Center and his membership in the Tufts Nutrition Council from Tufts University, a group of international leaders from diverse backgrounds who share a passion for nutrition and health. Andoni builds bridges apparently unrelated worlds, in so doing he enhances his own discipline. This can be witnessed in his collaboration with the marine and alimentary research center AZTI and the Imagineering Institute, a multi-disciplinary internet and digital media research & development center. His versatility and creativity always raging the predefined limits open windows to many new worlds. This pioneering attitude gives rise to theater performances with La Fura dels Baus and to the promotion of diverse documentaries such as Mugaritz BSO and OFF-ROAD. Aduriz aims to seduce us with a multisensory experience.

Something like this does not happen overnight. Andoni Luis Aduriz was born in San Sebastian in 1971, a city at the very heart of Basque gastronomy. He began his culinary studies, but after a not entirely successful venture into the academic world, the young Andoni began to express himself by means of tastes and textures. Subsequently, Andoni developed his appreciation for both new the Basque cuisine and local produce. On finishing his studies, he went to Catalonia to work in El Bulli, home of one of the world's most renowned chefs Ferran Adrià. This experience opened a world of possibilities to him.

In 1998, Aduriz embarked alone upon his most risky and satisfactory project: Mugaritz, which has been recognized with 2 Michelin stars since 2006. Mugaritz has become synonymous with R+D and the word “restaurant” has ceased to exist. As Aduriz himself acknowledges “It's something more”.

Mugaritz closes for four months a year, a window which is devoted almost exclusively to creativity. “It's a place where we sometimes even serve meals…”  The location, with the oak on the border, offers the chef a canvas on which to unleash his creativity, as well as being a place surrounded by tradition and local products. In Mugaritz, Aduriz has managed to achieve a balance avant-garde and traditional Basque cuisine. His refusal to conform has resulted in countless achievements: since 2006 Mugaritz has figured among the top ten in the list of Restaurant Magazine.

As part of his idea of socialization of the kitchen Andoni Luis Aduriz has given classes in Harvard University, the Massachusetts Institute of Technology, the University of Basque Country, Deusto University and Alain Ducasse training center in France as well as in the school The Culinary Institute of America in United States, among others.

Regarding dissemination, the chef goes a step further. In addition to the above-mentioned courses, Aduriz has also participated in scientific conferences, such as the Conference on Applied Cognitive Psychology organised by the Basque Center on Cognition, Brain and Language or the in Primary Care Conference. Also, outside the Basque Autonomous Community, the chef was a speaker at the Faculty of Health Sciences, University of Alicante, the Congress of the International of Biochemistry and Molecular Biology and at El futuro X venir, a series of conferences organized by Fundación Telefónica. All of his activity as a trainer, always based on his experience, has made him a role model, a guide who has encouraged teams in many different areas of operation.

The chef is also an advisor to different gastronomic establishments and companies."

But to speak only about Andoni Luis Aduriz's professional side would be a significant mistake. His human side is represented by his activities, always food related, of course. The chef promotes culinary initiatives annually whose only aim is to raise money for organisations such as Asteamur, L'ataxie Charlevoix-Saguenay Foundation, Starlight Children's Foundation Australia, UNICEF and many others.

The combination of the approach to new disciplines in focussing on cuisine and his tireless care regarding the product have earned Andoni Luis Aduriz numerous awards since his professional career began:

- Healthy Cuisine Award (personality) by the Royal Academy of Gastronomy (2018).

- Japanese Cuisine Goodwill Ambassador by The Ministry of Agriculture, Forestry and Fisheries (2021)

Andoni Luis Aduriz develops an intense publishing activity and is author and co-author of the following books: 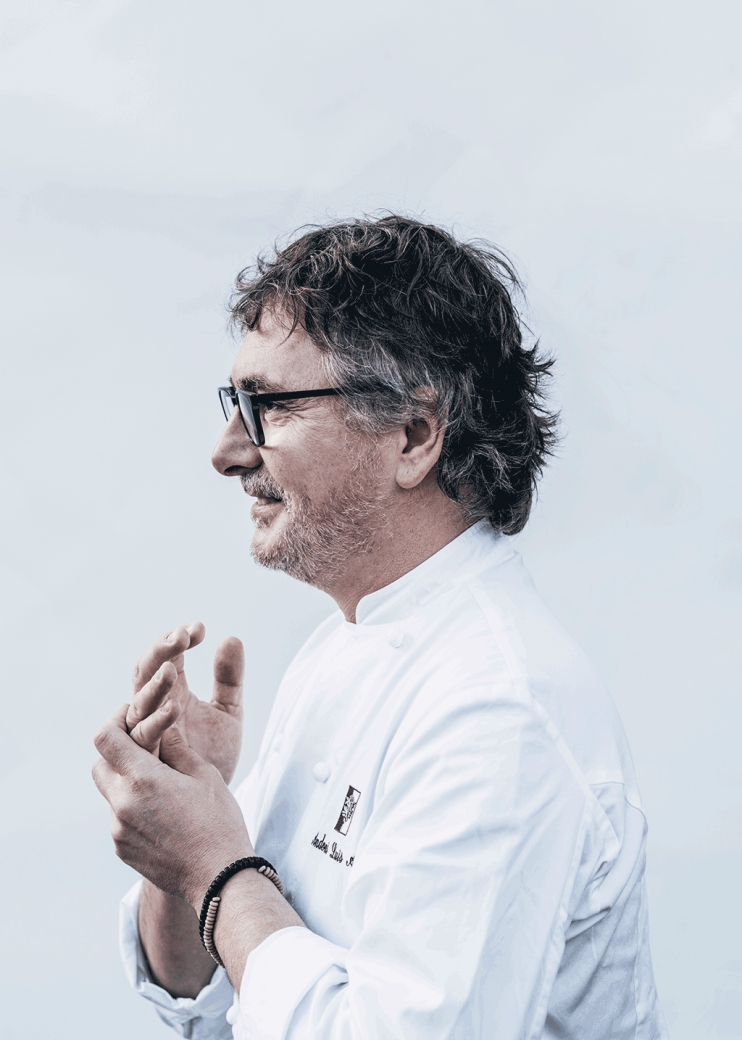